Bacterial Art Starts a Debate on Money and International Borders

We have been told over and over that bacteria are everywhere around us, especially on your smartphone screen. But most of us haven’t stopped to reflect on the fact — and consequences — of bacteria being all over our money.

A scientific study by the New York University called the Dirty Money Project revealed in 2014 the presence of 3,000 different types of bacteria living on 80 $1 banknotes circulating in New York. These bacteria came from human skin, mouths and genitalia, and, like money, they could be freely transported and exchanged across the world.

Artist Ken Rinaldo explores the many consequences of bacteria living on money in his project Borderless Bacteria; Colonialist Cash. Rinaldo cultured microbes on agar plates containing banknotes from currencies around the world that were collected at the international border at the Lisbon Airport. After letting them grow for two weeks, the pieces are exhibited to spark the debate on bacteria, money and borders.

“Bacterial cultures, fungi, and viruses finding transport on monetary exchange systems do not respect or understand borders,” states Rinaldo. “There are no visas or passports for microbes that hitch rides from hands, noses, and genitalia.”

The artist compares how bacteria use money as vectors to colonize new places to how Europeans colonized America, wiping 95% of native populations by bringing with them the germs that cause diseases like smallpox, measles or influenza. He calls microbes “the original colonizers,” since according to the evolutionary theory of Lynn Margulis, the eukaryotic cells that form our bodies evolved long ago from prokaryotes.

Jumping back to 2017, Rinaldo wonders how our economy and politics will influence the distribution of bacteria around the world. Do Chinese yuens and US dollars share the same bacteria given the extensive trade between both countries? Will bills from Palestine have less microbes because of the Israeli blockade? Do different microorganisms live on money from rich and poor countries? Could then microbes become a sign of wealth and status?

Given the fact that money could one day be a vector for the rapid distribution of dangerous microbes resistant to antimicrobials, the answer to these questions could actually help us understand and fight the spread of deadly diseases, especially as antibiotic resistance becomes an increasingly pressing issue.

Works from Borderless Bacteria; Colonialist Cash New Art Festival are currently on show at the in Lisbon until November 30th and will be at FACTT in Berlin from November 29th. 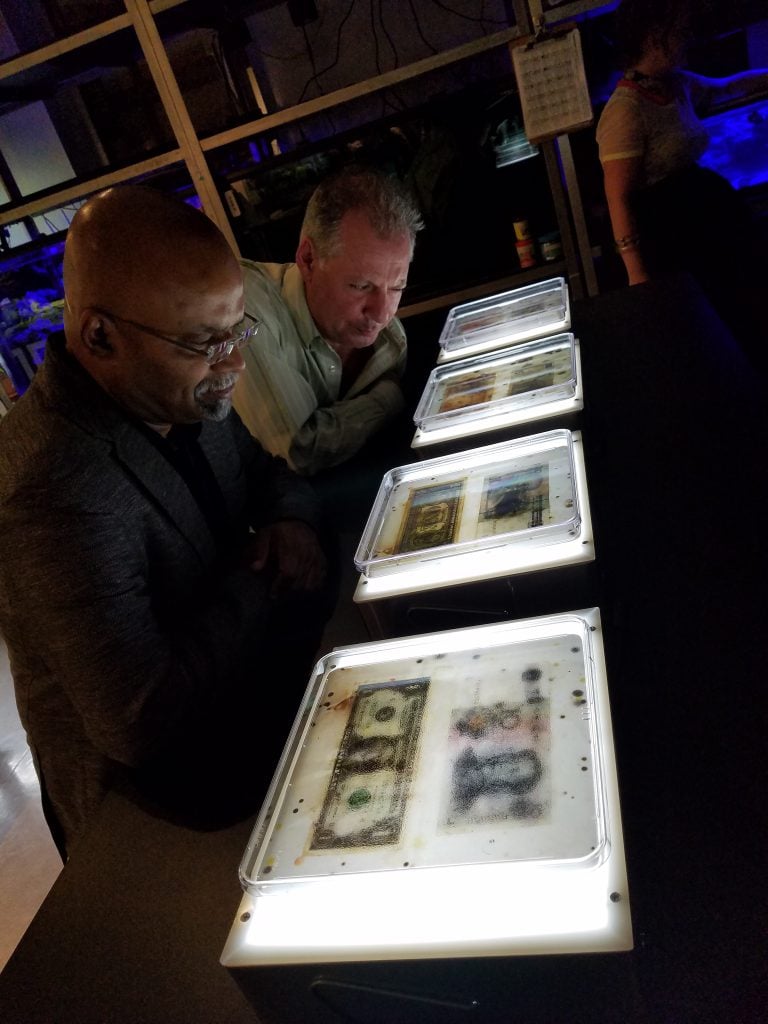 This awesome article Bacterial Art Starts a Debate on Money and International Borders appeared first on Labiotech.eu. Be kind and don’t copy it without asking 😉