Let’s Clean Up Our Oceans! New Technique Can Find Even the Tiniest Pieces of Plastic

Current research suggests that we only remove 1% of the plastic waste in our oceans. Thankfully, researchers in the UK have developed a technique to find the rest!

Researchers at the University of Warwick, UK, have developed a new and cheap method to find even the smallest bits of plastic that are floating around in oceans. The research published in Environmental Science & Technology outlines how the fluorescent dye specifically binds to plastic particles, making it possible to see them under a microscope and easily distinguishable from natural materials. The researchers found that tiny pieces of plastic are present at much higher levels than previously thought, which challenges current beliefs regarding the fate of plastic waste.

We produce almost 300 million tons of plastic each year, and more than 8 million tons of this is thought to end up in our oceans. Large pieces of plastic break down over time through weathering, producing tiny particles called ‘microplastics’. These microplastics often go undetected and can be very dangerous for the wildlife living there.

Seawater samples from Plymouth, on the South West coast of England, were taken and used to test the researchers’ dye. The plastic-binding dye could effectively quantify very small fragments of microplastics, less than 1mm, under a fluorescent microscope. The researchers found that these microplastics were present at higher levels than previously thought, as the new technique could detect significantly more than traditional methods.

Ocean microplastics of less than 1mm made visible with a fluorescent dye and microscopy.

They also discovered that the majority of microplastic was polypropylene, which is commonly used for food packaging. Carbios, a pioneer in the bioplasturgy field, is tackling this problem head-on by developing infinitely recyclable bioplastics. This overcomes issues with the current process of recycling plastic, which requires high temperatures and a lot of energy. In contrast, Carbios’ system uses enzymes to break down plastics into their original monomers, which can be re-used.

Carbios recently teamed up with cosmetics giant, L’Oréal, which has agreed to use the biotech’s technology for its new packaging. More and more firms are keen to make themselves ‘green’. Coca Cola and Danone are working with Dutch biotech Avantium to develop sustainable bottles and yoghurt pots, while Audi is collaborating with the French Global Bioenergies for the production of renewable gasoline. Even Lego is investigating the possibility of making its toy blocks out of bioplastics.

Big firms getting involved in renewable materials and energy sets a great example for smaller companies. With companies making an effort to reduce the amount of waste that ends up in our oceans – and throughout the rest of the environment – the challenge of finding a way to remove what’s already there remains within reach. 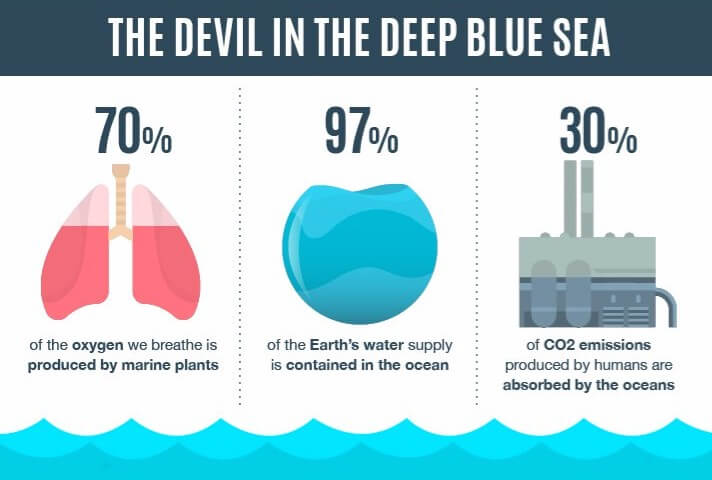 Our propensity to dump our waste in the sea could have a big impact on our lives, not just the wildlife living in our oceans. Image taken from the How Ocean Pollution Affects Humans infographic on www.plasticoceans.org.

This awesome article Let’s Clean Up Our Oceans! New Technique Can Find Even the Tiniest Pieces of Plastic appeared first on Labiotech.eu. Be kind and don’t copy it without asking 😉